On average, I'd say that about once every three-five years comes a game that really stands out. During this period there are often games I'll rate very highly, perhaps almost as highly as these standout games, but these particular games aren't just games I think are good, or even great, they are games that just clicked with me in a way that is often not easily explained.

If you can't relate to this with video games, then the same is true for me for all other forms of entertainment, music, film, books, TV shows, etc, the medium here isn't particularly important. The inexplicable nature of the way some things will just grab and consume you in such a way is something I feel not a lot of people give credit to. For a game to do this to me, it doesn't have to be perfect, it doesn't even have to do the things I care about most in a game well, I struggle to objectively measure what exactly it is that makes these games stand out.

The last game to do this came out in 2011, although it was not The Witcher 2 which also came out that year. It was Portal 2 which I separately describe as 'about as close to a perfect game as I have played', but that isn't really the whole reason why it appealed to me so much. It wasn't that I played it through and felt the quality was so high, with so few notable flaws and that's why it stood out (although I'm sure it played a part), it was something more than that. It appealed to me on a level in which things like particular details about the mechanics, level design, graphics and plot aren't that important. It's what the game as a whole, as an "experience" as much as I dislike to use the word, was.

Perhaps it is a little too early to say but I think I'm fairly confident in saying this, but The Witcher 3 is likely another game to stand alongside with the likes of Portal 2 in this list of games that fit the above vague, wishy-washy, almost-meaningless criteria. It's actually why I wanted to write a something about it, I'll not call it a review because it'll not contain any particularly useful information about the game, it'll be myself writing my thoughts of game. I wouldn't expect anything enlightening, no new perspectives or information to think about, I just want to gush about this game for a while in something more than a chain of 140 character tweets. 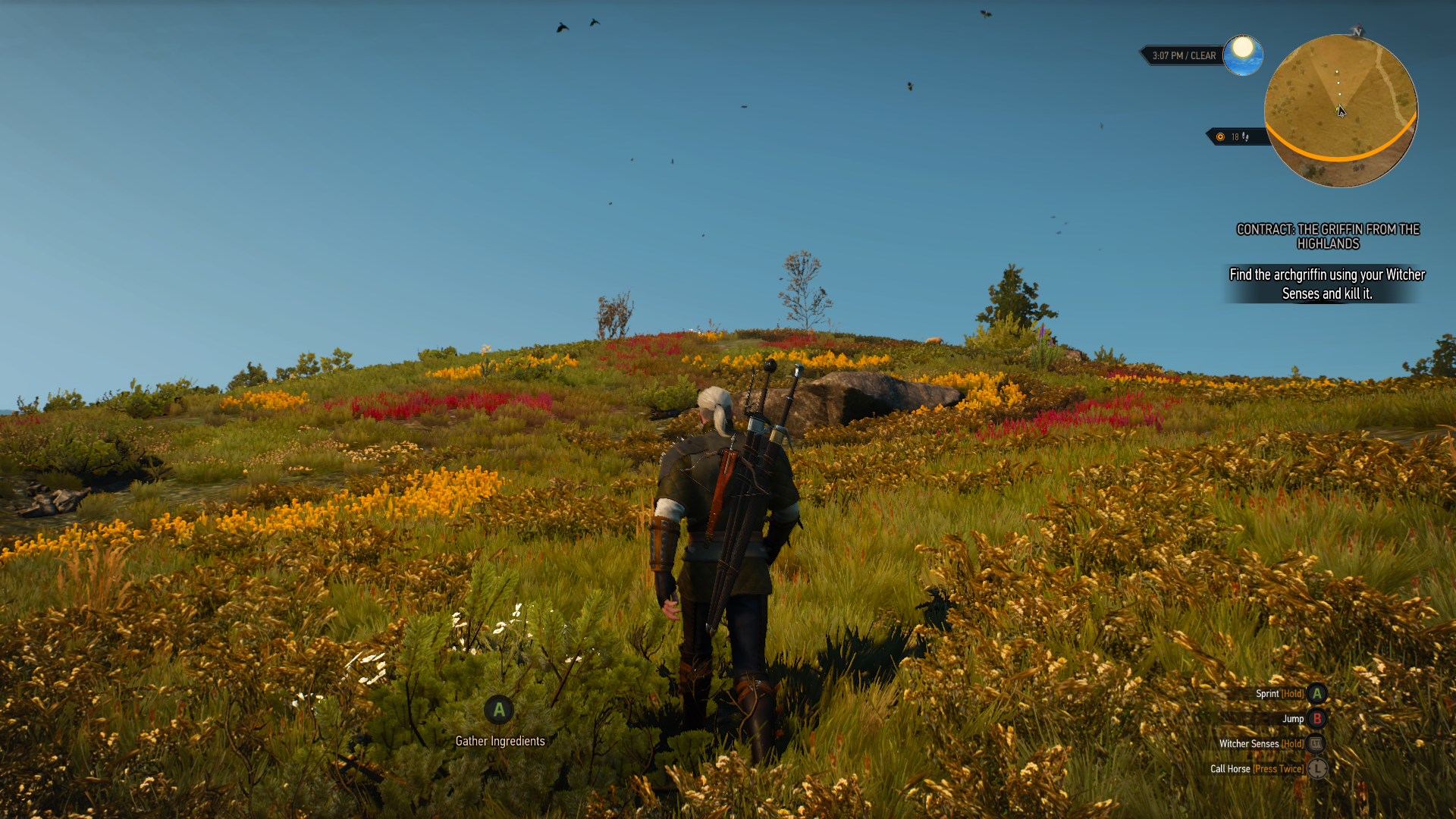 This game doesn't have the best combat, I absolutely enjoy it, but I think it has a few awkward elements and often fails to teach the player the best way to learn how to play the game. This leaves many players, myself included during the initial parts of the game, a little frustrated with some of the mechanics. But as I learned more about the combat and what it expects, I really did find myself enjoying it a lot, but despite this I do recognise fairly significant weaknesses, I think it would benefit from tighter mechanics and a set of systems that are more easily explained in their benefit to you as a player.

I think this is possibly going to be the biggest source of complaints for the game, and for a game that has you spending a lot of time in combat, it could be a big deal for many people. But I think with perseverance the combat can become very fun. The combat can be involving, there are things to master, it gives you freedom in how you approach battles, you can adopt a style that may be different from others and that you'll get a good amount of satisfaction out of.

There are a fair few other relatively minor complaints that I have, but my point here is just to make clear that my praise for the game isn't universal, there are issues with it, but despite this - it is one of the best games I have ever played.

The Witcher 3 is an open world RPG that doesn't feel compromised because of its open world nature like so many do, it feels natural and it feels like it has purpose. It's a big danger for games that continually boast their massive worlds, long playtime and generally large scope, many achieve those objectives but nowhere near to the level The Witcher 3 has.

I'm 75 hours into the game, I have completed the main quest, completed a reasonable amount of the side content available and even now I find myself in each and every gameplay session, in complete astonishment of the sheer amount of good quality content in this game. The random side characters you meet are interesting and the storylines in many of the side quests are of a quality absolutely on par with the main quest. The wealth of witcher contracts (monster killing / tracking quests) manage to capture the role of what a witcher is in this world. I feel like I understand what a witcher is, I feel like I understand their purpose and how they fit into the world. It's detail like that which has immersed me entirely into this world.

CD Projekt Red have managed to take the source material of The Witcher novels and create this amazing game world for you to experience and play around in and I do want to be sure to give credit to the source material (The Witcher novels) when I praise the interesting world and lore created, but it's taking that and interpreting it into a game in such a manner can't be easy. It's hard for me to get properly invested in stories and characters in video games (and your average film / TV show), but The Witcher 3 is one of those cases where it absolutely grabbed me, perhaps it is a result of everything the game is, but I did feel a strong investment into the characters.

I felt like I understood their feelings, motivations and the situations I'm left to make choices in felt realistic (to a point that is reasonably expected), bringing a lot of the nuance you find in interaction between real people. Choices felt weighty not because of their potential impact on a mechanic of the game, but for what you felt would be appropriate in the context of this character's world and situation. Not only this, but this game had me laughing in ways video games rarely do, so that's an achievement all on its own.

Choices (for the most part) don't feel like they're there as a game mechanic, yes, there are some consequences that do act as a system for locking/unlocking/changing content in a very video game way, but that's a difficult problem to solve in a balanced manner, so I don't feel strongly about that. The choices I thought about hardest were the minor ones, the ones where it was about the feelings and motivations of two characters, not how or what actions will or will not take place (for example).

In conclusion, whilst I don't think The Witcher 3 is a masterpiece in its narrative, or character development or in the written characters themselves but what it achieves as a sum of all the components this game is comprised of does, for me, stand out from most other video games, in ways I evidently can't coherently explain. I'm not a good writer, I don't think I'm particularly good at articulating my thoughts on.. almost anything, so I'll end this with a quote from Richard Cobbett's review on rockpapershotgun as it summarises my thoughts nicely.

Not a single one of those things, nor all of them put together in one great big failblob manages to tarnish what a wonderful time I had with The Witcher 3. None of it stopped it being one of the most exciting, varied, warmest, funniest RPGs that I’ve ever played, where I wanted to do every mission that came along just to see what it wanted. None of them, nor even the fact that by the end I was getting desperate to finish the damn thing, stopped me being sad when it was over and thrilled to know that there are two big expansions coming. I absolutely adored The Witcher 3. I wish I could wipe my memory and play it again from the start with more time, and no memory of what was coming.

However, another summarisation I want to highlight is that of Oli Welsh of Eurogamer in his review of The Witcher 3.

This is why I love The Witcher 3: Wild Hunt. It is crass in some places and overreaching in others, but despite its grandeur and its fantastical setting, it is a game made by, for and about human beings. It's lewd and perverse and poetic and hot-blooded. It's huge yet crafted; its systems are purposeful and it doesn't have a whiff of design by committee. It will last you months, yet not waste your time. Above all, it has a vivid, enduring personality, something that is exceedingly rare among its breed of mega-budget open-world epics (and that will probably be rarer still once Hideo Kojima and Konami part ways later this year). For my money, it's the greatest role-playing game in years.

It's especially relevant given I chose to use Oli's summarisation of Portal 2 to represent my own feelings four years ago in a post here.

CD Projekt Red are a studio that has just three games to their name now, The Witcher 1 through 3, the progression this studio has made is unfathomable, it has placed itself among the very best studios in the industry within such a short timeframe. Whilst the first Witcher game was for me, a little too rough to get into, The Witcher 2 was the point where CDPR really made it clear that they were a studio to watch. They brought a quality and a freshness to the 'AAA' range of games that got me excited. The Witcher 3 surpassed all my expectations in almost every way a

I can't wait to see what comes out of CDPR next, because has been The Witcher 3 was pretty special to me.

As a lot has been made of the graphics of this game pre and post release, I do want to talk about this for a little while. I played this game on PC, on almost all max settings (Hairworks off), and even with the lacklustre NVIDIA Kepler performance, my two 780s and G-Sync monitor assured me a great technical experience with good performance (65-85fps was fairly typical).

Some have expressed disappointment in the way the game looks, picking out individual elements of the scene to critique, which is okay - but for me I don't think this game looks great because it has amazing texture work or a fantastic lighting system, or any other number of advanced rendering techniques. This game is one of the best looking (and presented) games I have ever played because of everything the scene comes together to be, the weather, the foliage, the lighting, the environment in general, the soundtrack, it's all pieced together so well that technical deficiencies in individual areas seem almost irrelevant.

A key component of Valve's living room push was the Steam controller,…

As a consequence of PC gaming becoming more and more mainstream, we've…